Here it is again, with the non-permutations highlighted:

No general formula is known for the length of the shortest superpermutation on n symbols. If we denote this length s(n), then it is known that for n ≥ 3,

and it is known that neither bound is tight in general. We know the lower bound is not tight because s(5) has been computed exactly and is equal to 153, whereas the formula for the lower bound gives 152. We know the upper bound is not tight because there are superpermutations on 6 symbols of length 872, so we know that s(6) ≤ 872, whereas the formula for the upper bound gives 873.

END_OF_DOCUMENT_TOKEN_TO_BE_REPLACED

Squares of squares, and the group of rational points on the circle

The purpose of this post is to describe a slightly different way of thinking about the existence – or otherwise – of a 3×3 magic square of squares. Of course it may not lead to any real progress, but it does at least suggest some natural weaker questions that may be more amenable. It follows on from part 1 and part 2. END_OF_DOCUMENT_TOKEN_TO_BE_REPLACED

In the last post we saw that every 3×3 almost-magic square is a rearrangement of three three-term arithmetic progressions that have the same common difference. In other words, if we pick any three numbers x, y and z, and any common difference d, then the nine numbers

can be rearranged to make an almost-magic square

where all the rows and columns, and the leading diagonal, add up to x+y+z.

We’re interested in finding almost-magic squares where all the entries are square numbers, so that means we’re particularly interested in three-term arithmetic progressions of squares. Fortunately there is a well-developed theory of these things, which are closely related to Pythagorean triples.
END_OF_DOCUMENT_TOKEN_TO_BE_REPLACED

Magic squares of squares: Part I

A recent Numberphile video discussed an intriguing unsolved problem in number theory: is there a 3×3 magic square whose entries are all square numbers? (Matt Parker proposed a solution which doesn’t quite work: see the video for more. The “Parker square” even has its own Twitter account.)

It turns out that this question leads to some interesting mathematics, which I’m going to have a go at explaining. At the very least I hope to give some insight into why it’s a hard problem.

To reduce the risk that I’ll run out of time and energy before pressing Publish, I’m going to split this post into two or possibly three parts, which I’ll post separately. The first part, which you’re reading right now, gives some background on 3×3 magic squares. The second will explain how to find almost-magic squares of squares using a bit of number theory and computer algebra. By almost-magic I mean that the rows and the columns and one of the two diagonals have the same sum.

The third, if I write it, will be more speculative and look at some possible approaches to either finding the mythical square of squares or proving that it doesn’t exist.
END_OF_DOCUMENT_TOKEN_TO_BE_REPLACED 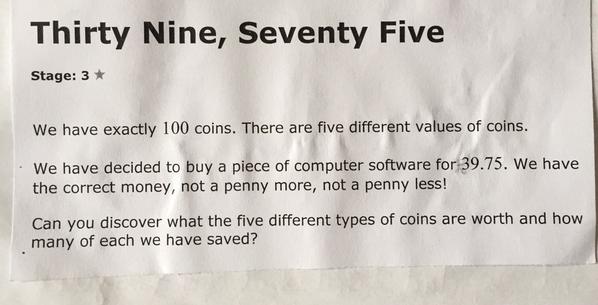 END_OF_DOCUMENT_TOKEN_TO_BE_REPLACED

The UK Government Statistical Service recently released its good practice guidance for releasing statistics in spreadsheets. While this advice is clearly well-intentioned*, and parts of it are good, the overall effect is to encourage the release of data in formats that are difficult to process by computer. This is a disappointing retrograde step.

END_OF_DOCUMENT_TOKEN_TO_BE_REPLACED

What’s the shortest string that contains every possible permutation of ABCD somewhere inside it? As it happens, it’s 33 letters long: ABCDABCADBCABDCABACDBACBDACBADCBA. A string like this is called a minimal superpermutation.

So what’s the shortest string that contains every possible permutation of ABCDE? It was recently shown that 153 letters is the shortest possible, and that there are eight different superpermutations of this length.

Okay, what about ABCDEF? The answer is that nobody knows. Until this week the shortest known superpermutation of ABCDEF was 873 letters long:

and it was thought that might be the shortest possible.

But we now know it isn’t, because I found a shorter one:

I’ve uploaded a short note about it to the arxiv.

This document is an incomplete draft.

About two years ago I wrote about a category-theoretic treatment of collaborative text editing. That post is unique in the history of Bosker Blog in having been cited – twice so far that I know of – in the academic literature; so it’s a little embarrassing for me to have to explain that it is almost entirely wrong. The good news is that the core idea can be rescued, and the corrected story is quite interesting. Other writers on this subject seem to have made at least some of the same mistakes I did, so I hope this will be useful to at least a few other people too. END_OF_DOCUMENT_TOKEN_TO_BE_REPLACED

Decoding the mysterious symmetry of the bicycle lock numbers

Suppose you have a lock of this sort 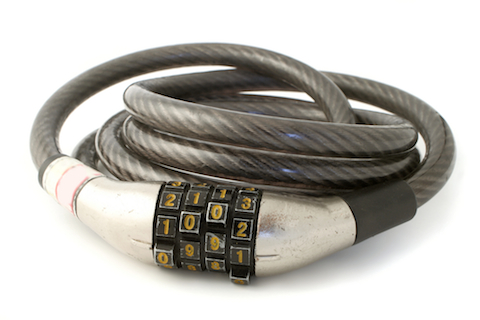 that has n dials and k numbers on each dial. Let m(n, k) be the minimum number of turns that always suffice to open the lock from any starting position, where a turn consists of rotating any number of adjacent rings by one place.

In the previous post, we found an algorithm for computing these bicycle lock numbers, revealing a mysterious symmetry, END_OF_DOCUMENT_TOKEN_TO_BE_REPLACED 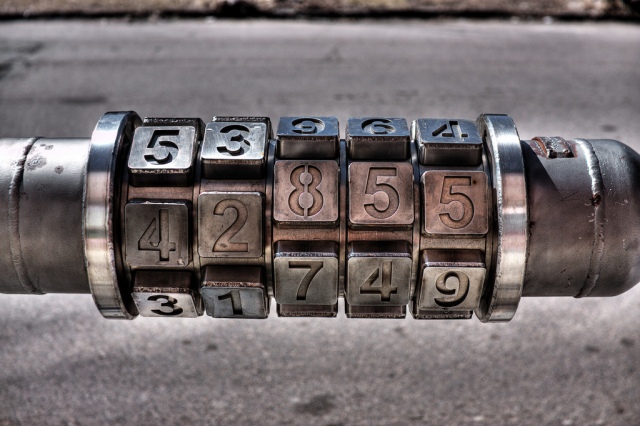 Don’t lock your bicycle with a combination lock. Someone will steal it: I learnt this the hard way. It’s quite easy to open a combination lock by feel, without knowing the combination. Try it: with a bit of practice, you can open the lock with your eyes shut. (It’s easier to do this with an old wobbly lock than a tight-fitting new one.)
END_OF_DOCUMENT_TOKEN_TO_BE_REPLACED
Posted in algorithms, Mathematics | 4 Comments
Bosker Blog
Blog at WordPress.com.
Loading Comments...